A boy in Hitler’s army discovers that his mother is hiding a Jewish girl in their house.
Director:
Author Whitey Taika:
Christine Leunens (from the book “The Sky in a Cage”), “Taika Whitey” by Bintang (screenplay):
Roman Griffin Davis, Thomasine Mackenzie, Scarlett Johansson | A World War II satire features a lone German boy named Jojo (Roman Griffin Davis) who looks away when he discovers that a single mother (Scarlett Johansson) has hidden a young Jewish girl (Thomasin Mackenzie) in her attic. Only with the help of his stupid fictional friend Adolf Hitler (Tyke Whitey) does Jojo have to face blind nationalism. 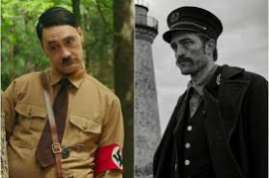